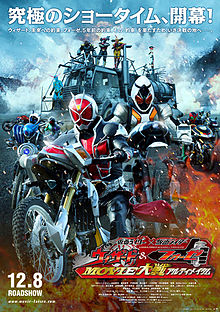 Left behind in the real world, Koyomi is about to be attacked by the monsters until Kamen Riders Fourze, Meteor, and Nadeshiko appear to protect her. Meanwhile, Wiseman reveals to Phoenix and Medusa that when the Akumaizers throw the fully charged Zeber into the ocean of magic beneath the Underworld, the outside world will be overflown with enough magic energy to kill all humans. Upon learning the situation from Koyomi, Gentaro makes use of a Magic Ring that somehow is in his possession to gain entry in Yu’s Underworld with his companions, arriving in time to save Haruto from the monsters. Gentaro recognizes Haruto, who claims to not know him. However, the Akumaizers send a larger force to deal with the Kamen Riders as they escape with Poitrine and the Zeber. Koyomi is attacked by Ghouls that have emerged from the machine and is saved by Eiji Hino, who uses his powers to reach the children in the Underworld and grant them Magic Rings which they use to summon Kamen Riders OOO, Birth, Double, and Accel.