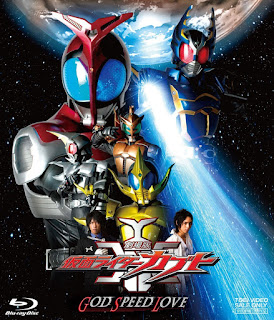 In 1999, an enormous meteor crashed onto Earth and caysed a global calamity that depleted the planet’s waters. Furthermore, the meteor carried extraterrestrial creatures known as the Worms who proceeded to kill humans and assume their identities. In order to counter this new threat, ZECT was formed, who in turn created the Masked Rider System to combat the Worms. The battles lasts over seven years, depleting Earth’s resources and turning it into a barren wasteland. By present time, power struggles in ZECT have caused Hidenori Oda to establish a splinter group called Neo-ZECT with Daisuke Kazama and Shura Hokuto to fight against ZECT’s authority. A mysterious youth named Souji Tendou arrives to the city and decides to sell his power to either Neo-ZECT or ZECT for his own personal agenda. At the same time, ZECT has obtained intelligence about a large comet orbiting the vicinity of space. By building the Jacob’s Ladder space station, they plan to capture this comet and spread its water throughout Earth, replenishing the Earth’s oceans. The space station includes a function that works in conjunction with the Rider System’s Clock Up function. Tendou joins Neo-ZECT after telling Kagami that he will act as a double agent and report back what Neo-ZECT is currently planning while destroying the organization from the inside. Tendou, in turns, updates Neo-ZECT about ZECT’s operation, effectively manipulating both groups while getting intel on ZECT’s golden rider.

Plot In the beginning of the movie, 20 years ago, on the moon, the 4 Ultra brothers, Ultraman, Seven, Jack, and Ace were fighting a...